This weekend we stayed with my parents and went to the wedding of an old school friend. It was one of those wedding invites that didn't come with a gift list. And as I haven't seen this old school friend in quite a few years, and never met her now husband before, I had no idea what to give them. If in doubt, sew something. I can at least be sure that no one else got them the same thing!

I did some pinning, and came across this pin, which linked back to a no-longer-open Etsy shop. I googled a bit and found nothing more except broken links - all I know is that the original design was by someone called Bec Groves. With the printer not working, I ended up redrawing the image I had found. I surprised myself at how well that step went.  I also added in names and date which weren't part of the original. 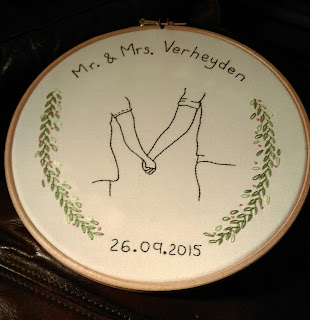 My finished embroidery is definitely a copy of the pin I found, but with a few personal touches. As well as the names and date, I also did a chunkier leaf border using feathered chain stitch as my base, with some lazy daisy stitches and French knots.

It was also apple-picking weekend! We now have more apples than we know what to do with! About 75 kilos.... 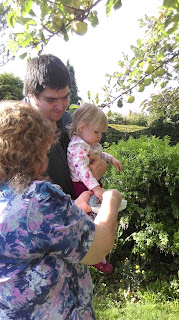 In the current sewing drought I forgot to share something with you that I actually finished. Back in July. It was an extra for the Thimble Blossoms mini quilts swap. I work on the basis that everyone loves zippy pouches and you can never have too many! 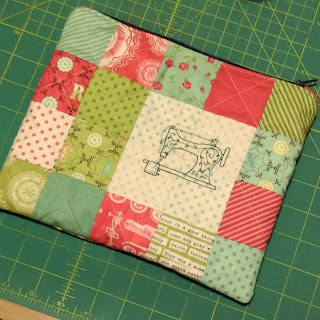 I used a mini charm pack of Odds and Ends by Julie Comstock which I've had for ages. I always struggle to know how to use them, but this was the perfect project: I laid them out in two 5x4 grids, carefully positioning the lowest volume charms together on one side. This gave me a canvas for a small sewing machine embroidery. 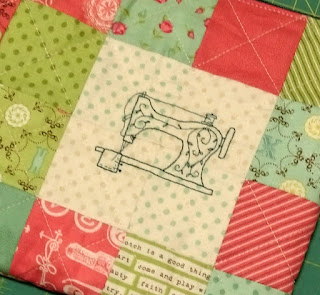 It's hand stitched in one or two strands of DMC stranded cotton in dark grey and I added some basic cross hatch quilting by machine.

The 5x4 layout left two mini charms over, which I used to add tags to each end of the zip when I made the pouch up. Unfortunately I totally forgot to square off the corners! And I struck gold with this extra - apparently the fabric line was one of my partner's favourites!

This was on my Finish Along list at the start of the quarter.

Five posts in the last two months is pretty low for me, so it's about time I told you why... 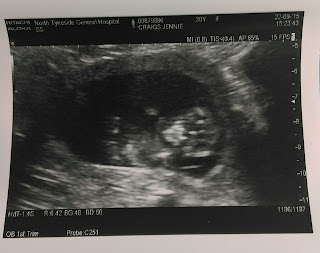 It turns out that when I'm pregnant and in the first trimester, I have energy for anything!

Baby is due early April and I'm now 13 weeks in and starting to feel like I have a little more energy - if only the sickness and nausea were starting to abate as well! 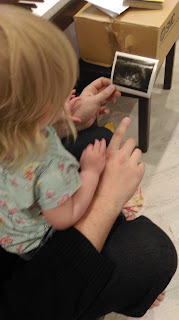 I did manage to turn on my sewing machine yesterday so hopefully some more sewing in the near future!
Posted by Jennie at 19:48 9 comments:

I signed up for a lot of swaps this year, and I couldn't resist a Harry Potter mini quilt swap. I read the books when they came out and I love the films so this had to be done. But it took me a long time to decide on a quilt to make, because this kind of novelty sewing really isn't me at all.

I'd started collecting ideas on a Pinterest board, and loved the patronus ideas, but wasn't sure I could pull them off as well as I wanted. And then I came across the quote from Ron about the Burrow "It's not much, but it's home." 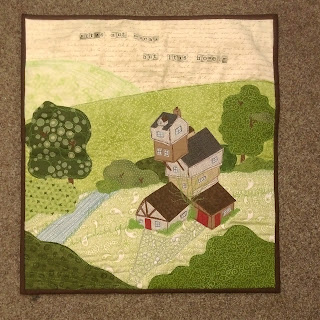 I couldn't get this idea out of my head. My first idea was to paper piece it, but as soon as I sketched out what I had in mind that seemed like a really stupid idea. Free motion applique for the win. And even then it took some thought, making sure I got the layers right!

I finished the building and wasn't sure whether it was right. So I keep adding free motion details of plants, and driveway until the house seemed more settled in its landscape and this was the end result.I used stamps to add the quote - fingers crossed the whole time that I didn't spell anything wrong! 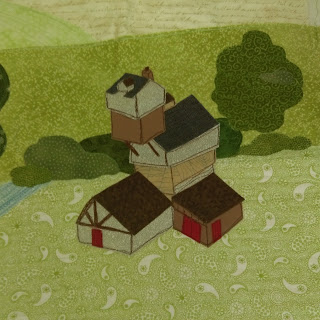 I got all of the free motion sewing done a few weeks ahead of the deadline, and then had to wait until I could pick up the brown fabric to bind it. I pulled it down thinking it was a quick finish only to discover that I hadn't added the backing yet: I'd done all of the fine work without the back to hide the mess I was making, with plans to add the backing and then just echo a few of the major lines to hold it all together. My quick finish took a few hours longer than expected. But I'm thrilled with the result.

My partner received it a few days ago and seems thrilled. I'm still waiting to see what I receive. Shipping deadline was 4th September so whilst I'm impatient, I'm not worried yet!

Inspired by the swap I also spent the last few weeks re-reading all the books from the beginning. When I got to the Order of the Phoenix I was amazed - I know I read it when it first came out, but I had forgotten so many of the details - and of course the films only do contain the bare minimum really. Throughout the last three books were so many surprises!

This mini quilt was on my Finish Along list, so in just a few weeks I will link up with Adrianne.

Life got in the way of hand made extras in this swap - I had planned and designed the embroidery for  a zippy pouch - I even cut the fabric and marked it up for quilting. But in the end I settled for a keyring I found on Etsy with Alohamora written on (for the non-Potters out there it's the spell to open locked doors!). I love a lot of the items in Blue Hawk Design's shop and they are UK based!
Posted by Jennie at 15:50 2 comments:

I've been doing a lot of hand piecing again this month and my focus has been my La Passacaglia quilt. I've been working on three different rosettes: first up this blue one. 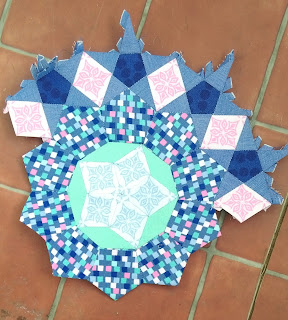 I used quite a lot of Kate Spain fabrics in this rosette. The aqua around the centre is a Cotton and Steel basic cut so you can't see the dots, the dark blue star centres are Pearl Bracelets and the star points are a shot cotton. I had originally basted enough pieces for 8 stars, but once I started piecing I was quite concerned that there wasn't enough contrast between the large pentagons and the star points.  So I stopped with just 4 stars. However, since I stopped, this rosette has really grown on me, so I'm going to add on the remaining stars as originally planned. The lower contrast means that different shapes jump out at you when you look at it, which in a quilt of many similar blocks is quite a good thing, I think.

I started a rosette using an Art Gallery fabric from Carnaby Street as my inspiration. I've only pieced the very centre so far, and haven't added on the inspiration fabric yet. But it is started, and I'm pretty pleased with how the fussy cutting in the centre turned out! 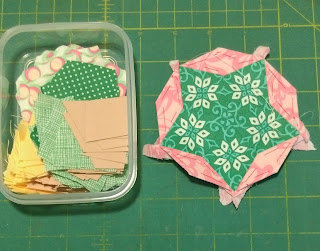 And then, just before we went on holiday I had a brainwave to make an Architextures rosette, using only Architextures fabric from Carolyn Friedlander. This is one of my all time favourite fabric lines and I'm getting close to running out of some of the prints now, which is very sad. 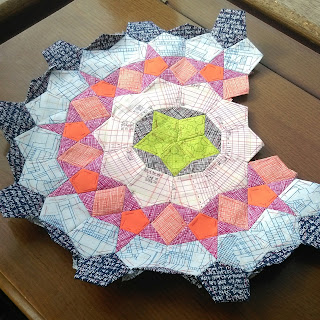 This started out as one of the smaller rosette - I'd planned just to go out to the first round of stars using lime green, plum and orange. But then I decided to keep going and add in the blue and more green. I've got as far as adding the light blue ring, and I've just started on the navy. A lower volume blue round and some green stars to complete and this will be one of the four big rosettes in my finished quilt.

This was all of the rosettes a couple of weeks ago. I love where this is going. I'm not doing a great deal of fussy cutting - mostly just making sure the pattern is straight, but I love how this makes the fabric itself the focus and you don't lose the shapes you are piecing in the business of many patterns. 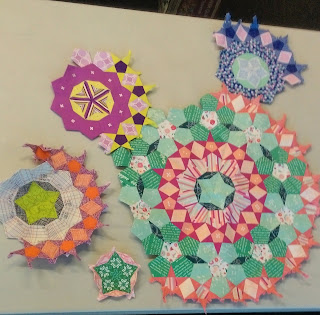 I think this is close to how they will go together in the finished quilt.... but with the blue top right moved next to the purple and lime green. And a few rosettes in between.

Linking up with WIP Wednesday for the first time in a few weeks.
Posted by Jennie at 18:11 4 comments: