I know it's Friday but it's Scraptastic Tuesday week! Does that make any sense?

I've got some scraps to share with you! Last month I shared my Preggosaurus pouch, and my sister-in-law's partner commented on Instagram that it was "fab". It was her birthday this week so I made a sister to the Preggosaurus Pouch. 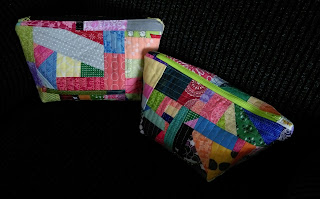 This is the Baby-Brain Pouch. 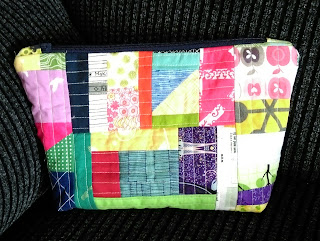 There's a good reason for that name: I made a right bloody hash of it and I'm blaming baby brain. I had to put it together in short, stolen moments, when both girls were otherwise occupied. It took a couple of attempts to get the panels big enough. I packed away my scraps before I measured - duh! Then I cut the first zip to the wrong length. Yep. Then I forgot to topstitch one side of the zip, so once I'd finished the lining kept getting caught in the zip, and I had to do a fudge job. Then I forgot to open the zip before stitching it all up, which meant turing the finished pouch through was a time consuming and foul-mouthed experience. And then once I'd turned it through, I realised I'd forgotten to box the corners, so had to turn it back. Baby brain. 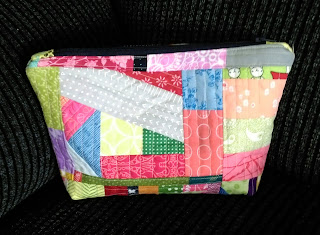 This hasn't been the only time the scrap basket has been up-ended in the last month. I was due to be induced at 11 days overdue on 19th April. Baby was showing no signs of making an entrance. The induction is booked on the basis that there is room for you in the delivery suite. We called at 1pm as instructed and were told that they were very busy and we couldn't go in. Call back at 5pm. That was 4 very, very long hours and I needed something mindless. So I got out the scraps and started cutting pieces 1"x 2.5" and stitching them together in sets of three. I got a fair few done before the 5pm deadline when thankfully, they said come in at 6.30pm. The first time I sat at my sewing machine after we came back home, I sewed the individual "blocks" together to get this. 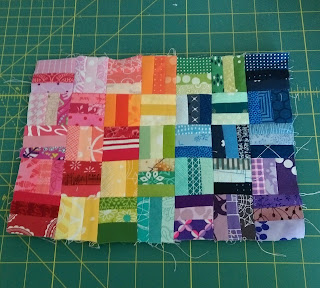 If I'm honest, I'm not sure where this is going, and I'm still working on a witty name for this project. It may just be this. It may get bigger.

And one last scrap suggestion. You know those really tiny scraps that you simply cannot use, because once you've taken some seam allowances off (even teensy tiny ones), there is no fabric left? The reception class at a local primary school will take them and the kids get their glue out and make collages from them! There is literally no waste. Turns out Mia also likes playing with prit stick! Here's her offering from this morning. It currently has pride of place on the fridge. 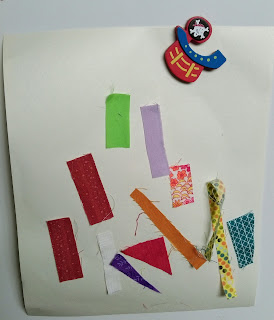 Linking up with Scraptastic Tuesday!

I've been doing quite a lot of embroidery since Jessica arrived. It started with one of those dangerous hours where I was cuddling the baby with one hand and browsing Pinterest with the other. I don't know how I found it now, as is the way with Pinterest, but I came across an embroidery designer I'd never heard of before: Kelly Fletcher. I followed the links through to her pattern store and was blown away. There were so, so many patterns I could have started right away. I pinned quite a lot, and then picked my favourite, an alphabet sampler, paid my money and printed it off. 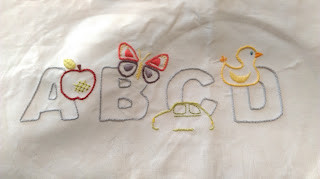 This is my progress so far: A-D but no wheels! I've now received the threads I was missing, so there's no excuse for the wheels to still be missing. I'm loving the challenge of this piece. Because Kelly's designs are rooted in Jacobean crewel-work, she uses a lot of raised stitches in her designs - no backstitch here! I'm getting happier with my stem stitch and I think I've mastered corners, but this evening I tried bullion knots for the first time. Nope. Not a hope in a hell! They got cut out and satin stitch was used to replace them!

I haven't made as much progress on this piece as I could have because I've been distracted with two other, smaller embroideries. First up is the parental advisory embroidery I stitched up for a friend celebrating her thirtieth birthday. It's not necessarily something I would put on my own wall, but is so perfectly her that I couldn't resist! 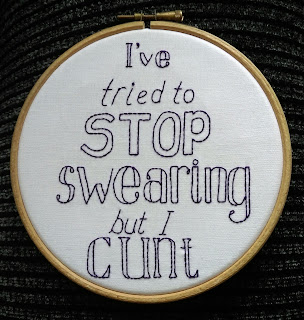 And then another quick stitch was this J for Jessica. I stitched up the A from the same alphabet a couple of months ago for Mia and had picked out the thread at the time. This is Jessica's first hoop for her nursery. The thread is from the new DMC Coloris range. 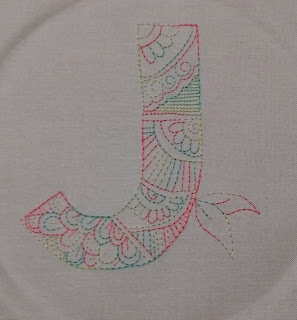 And we'll finish up with a snuggle time selfie! 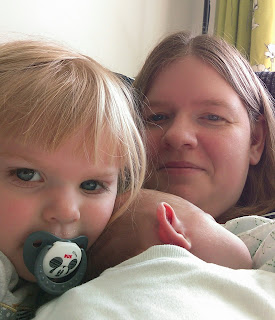 I have a finish along finish to share today! 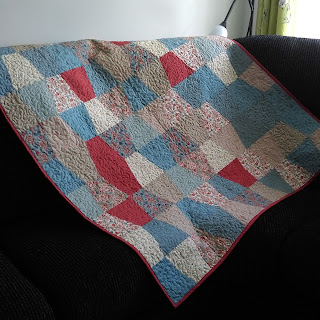 Two years ago my mother-in-law, Linda, asked me to quilt a quilt top she'd made. It's not my style of fabric, but it is a lovely quilt top! I then ignored it. We moved house with it. I ignored it a bit more. I did make sure that it was downstairs and in view, rather than hidden in a cupboard. By keeping it in sight, it's even made it onto quite a few finish along lists. Though that's as far as it got.

The day before I was induced, Linda, came round. She spotted the quilt. Mentioned the quilt. And I took my opportunity: Linda entertained Mia and rather than spend the next two and half hours sat on the sofa, I spent them at my sewing machine.

And that was all the time it took - two and a half hours and it was done. Tell me again why I've put this off for two years? I did an all over stipple, which is well in my comfort zone. Much as I like challenging myself with more complex free motion quilting, I do actually really like the effect of a stipple, especially after it's been washed. I used a cream 40w Aurifil thread for the stipple - 40w isn't my poison of choice, but when you accidentally order 4 reels of it over the years, and don't use it, you build up quite the stock pile! 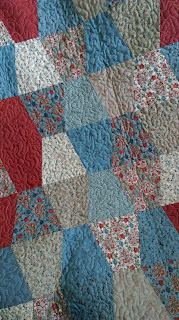 And the binding was something of a miracle. I knew I had the fabric. We moved house with the fabric. I walked straight into the room where I store my sewing supplies and picked it up straight away - and that, my friends, is a true miracle! It wasn't until this week that I finally got to making and attaching the binding. That red frame really sets it off. This quilt will be on its way to its new owners soon.

At the end of the quarter I'll link up with the Finish Along ladies! You can find my original list here.

Summer is just around the corner

It's May. My favourite month. Suddenly the trees have leaves and blossoms on and it feels like summer is near. But first, how was April? The first half of April was spent waiting for Baby to arrive: I managed to get more sewing done than I had thought I would: I am especially pleased with the progress I made on the #365quilt: I ploughed through blocks having fallen behind, and found that I had enough to piece the quilt up to the first dark border. Of course, the nature of a block-a-day project means I am now ridiculously behind again! 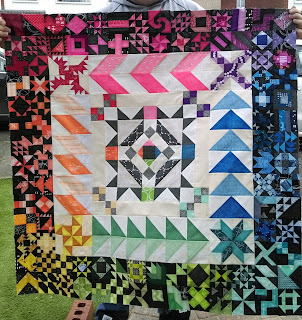 I even had a couple of finishes! I finally finished a cushion cover that had been waiting to be quilted for months and months. This was finished the day I was induced! 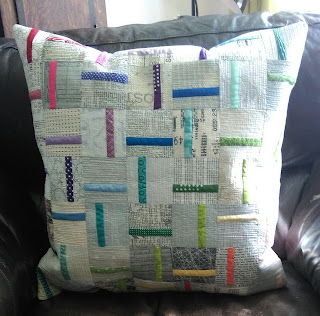 I made a pouch for Mia's many hair clips. 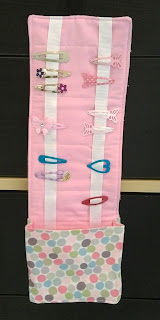 I used up some scraps on a Preggosaurus Pouch (it was just how I was feeling that day). 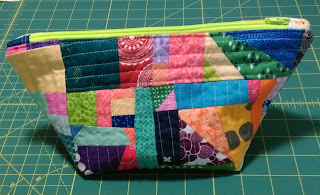 And I finished the yellow and grey quilt - another project that had been sitting round for ever. 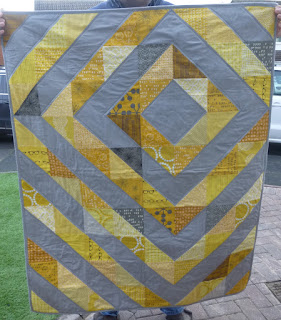 Michael went back to work today after his paternity leave, and I feel like it's time to become a human being again. 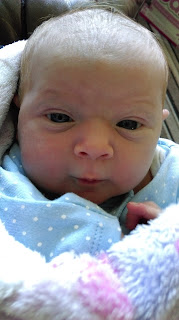 Whilst I was pregnant, due to lack of energy all round, the house became a bit of a state. With the help of my parents over the weekend and starting with a weekly chore plan, I intend to reclaim the house. I've started with the living room, where I spend most of my time, and I already feel much better about it. And we have new sofas arriving tomorrow! I was told off last week for overdoing it, but in the last few days I've started feeling much, much better!

I have sewing plans too: all of a sudden everyone seems to be pregnant: Between now and Christmas I have at least five baby quilts to make as gifts, and another few, including this one, that I want to make for Mia and Jessica, in addition to everything I've already started and shared here!

And yesterday information was released for the Summer Sampler 2016. I have signed up. Of course. And I even know what fabric I'm going to use: I've been hoarding a fat quarter bundle of Dreamin' Vintage from Art Gallery. I even picked up a backing from the same line when it went on sale, and I have a chunk of Pure Elements in white! #sewmystash2016 The first pattern will be released on 16th May so I have a couple of weeks before I can start.

Here's looking forward to summer!
Posted by Jennie at 20:17 3 comments: