I'm still going strong with this block of the month... here's month 6's offering! I think this might be my favourite block so far.... 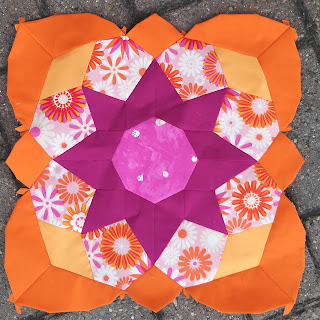 And guess what!? I quilted one of the blocks this month too! 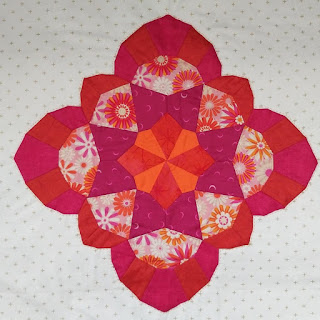 Earlier this month I finished a little embroidery I started back in March. The pattern is called Bloom by Jessica Long at Namaste Embroidery and it was run as a Sew-Along which I failed to keep up with! After my success using colour-tinting on my February embroidery, I had another go for this, and again I'm really pleased with the results. I love the depth it gives the piece without the need to infill entire flowers or leaves, yet it doesn't over-power the embroidery. I have bought a greater variety of pencils already so expect more colour-tinting to come! 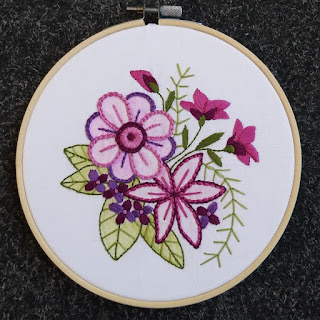 I've done embroidery for a long time, firstly cross-stitch and then free embroidery, but I rarely use any more than 2 threads (of 6-stranded embroidery thread - normally DMC). This was a little different as large parts of the work were done in all 6 strands. And much as I love the finished look with the large flowers popping out boldly, I did not enjoy sewing it. Even after changing to a larger needle, there was a lot of stress on my hands gripping the needle to pull it through the fabric. It was good experience and it's good to know for future embroideries. 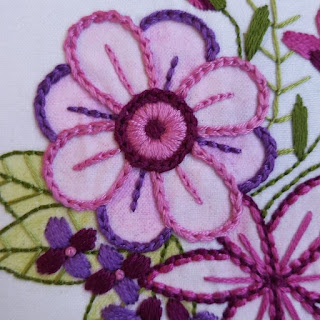 But it certainly wouldn't stop me buying more of Jessica's patterns - the instructions were well written and she has some beauties to chose from!

Back in March, I introduced you to a new project: Geo Diamons is an EPP project designed by @anomiealicec and run as a block of the month. All of the blocks are the same, and whilst I'm using slightly different fabrics, mine are all the same colour. I'm hoping this will result in some really good patterns with the repeats, but it also means it's a bit boring to share here every month. 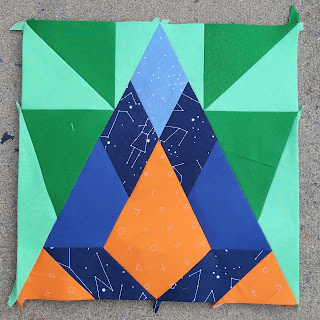 But we're up to month four now, which means I can start to show you how some of those repeats are going to look... here are a couple of different layouts! 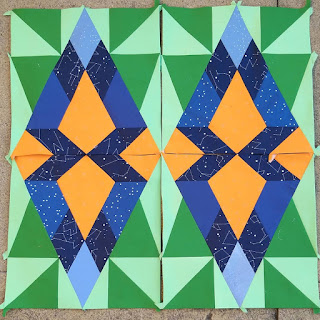 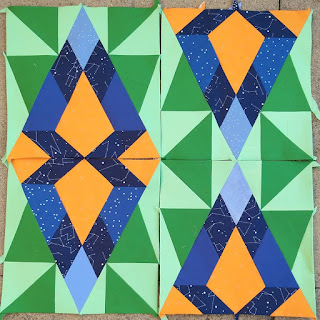 I'm really pleased with progress and aiming for this to be finished and on Josh's buggy next May.
Posted by Jennie at 19:00 No comments:

This month's meet up of the North East Modern Quilt Guild was a special one! Chris English headed north to join us for a day of sewing our scraps! It was such a good day - there was a real buzz in the room, there was fabric flying everywhere, and we all learned something new!

Chris teaches two techniques: crumb blocks, combining scraps with an old shirt, and Portholes. Here's what I made in the workshop: 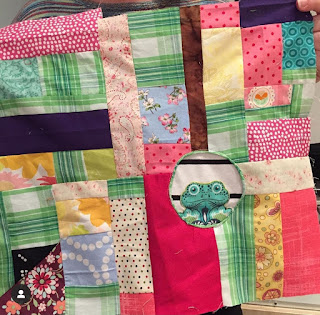 I used an old shirt of Michael's - and I love that green colour, and the portholes are filled with a stripey maternity T-shirt which I'd embellished (otherwise known as hid a stain) with a Tula frog. I have no need of it anymore, so it was nice to be able to recycle it!

And when I got home I kept going. And instead of a cushion, which was the aim of the workshop, I ended up with a whole quilt.... 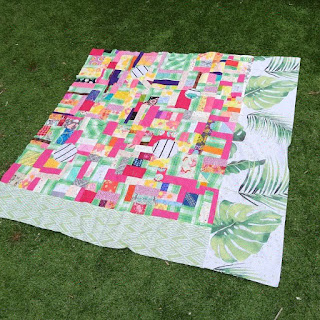 The added borders are leftovers from quilt backings (otherwise known as Asda duvet covers). I need to find an appropriate, recycled, backing and then I'm going to hand-quilt it!
Posted by Jennie at 20:00 No comments: 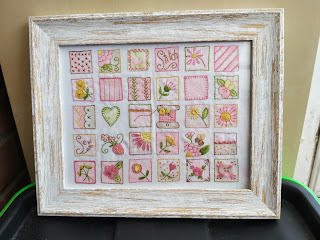 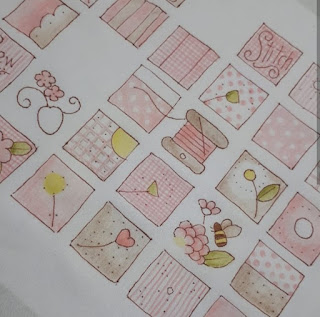 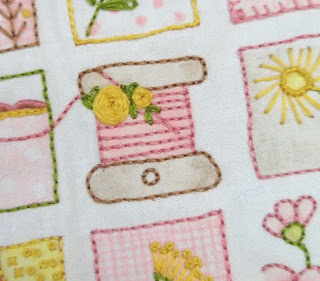 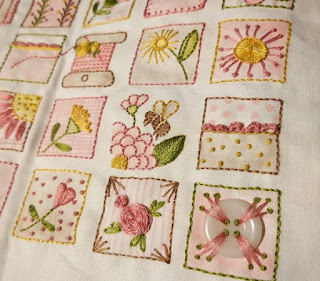 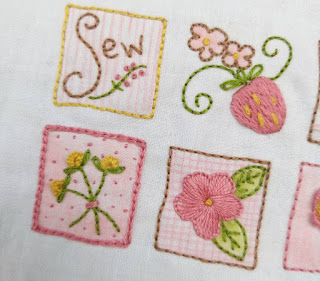 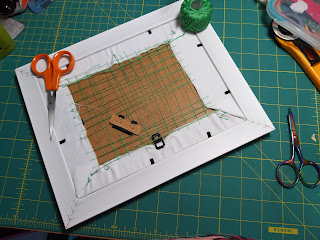 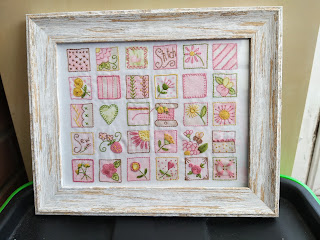 May has been quite the month! It's my final month of maternity leave and has been dominated with chicken pox... Mia got her first spot on 9th May and by the end of the month both Jessica and Joshua were covered in spots... But at least it's over and done with before I go back to work...

My highlight of the month was ticking a box on my bucket list: two years ago we visited Belsay Castle and viewed the quilt show held by the Quilters Guild local region. At the time, I was just finishing off my 365 Quilt Challenge and said how much I would love to see it hanging at the next display at Belsay. The show happens every two years, and was on over the bank holiday weekend. Here is my quilt hanging in the Library! 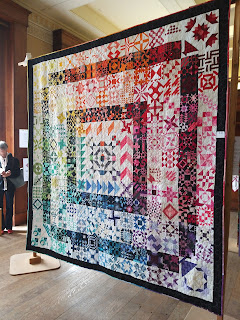 Despite the chicken pox, I have been sewing! I finished my Trinket Quilt: 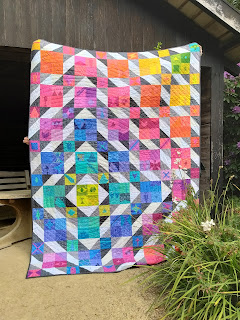 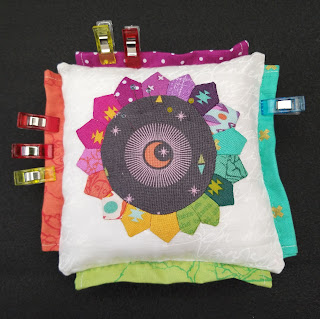 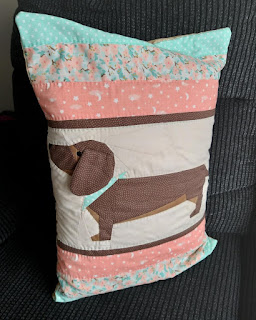 I finally framed the Moon Moth embroidery I was working on 6 weeks ago: 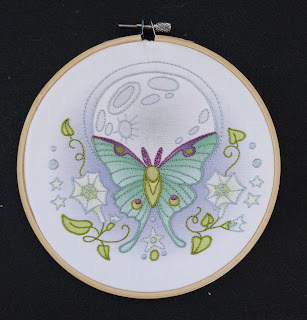 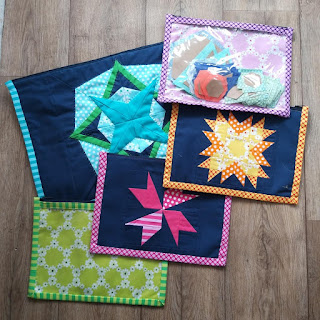 I've done loads of EPP for various different projects including the below and a Mandolin block! 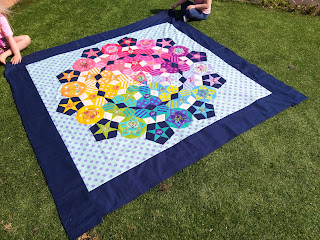 I finally pieced the fourth unicorn and got the blocks sashed: 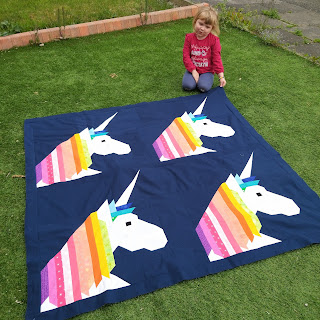 I'm up to date with Coming Home: 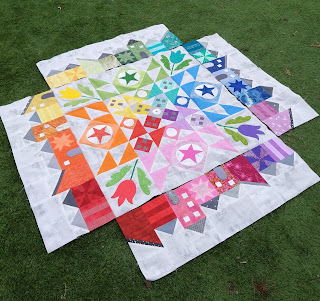 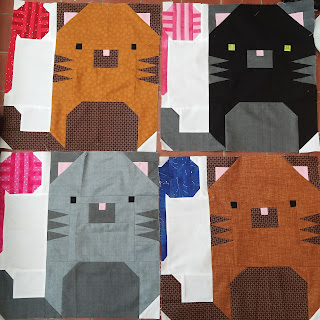 And I started two new projects (and signed up for two more!): Dear Jen: 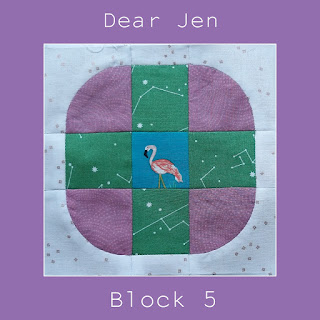 And the Summer Sampler 2019 (I may change the fabrics and redo this one): 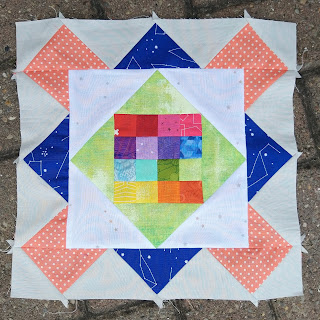 I fear that sewing productivity may fall in the coming weeks... back to work on Monday!

I'm linking up with Archie the Wonder Dog's Furtle!