It's another year of the Finish Along. And whilst the format has changed slightly to make it more Instagram focused, I've decided to still post a list on my blog as a way of keeping myself accountable and recording my finishes!

So firstly I have a few carryover items:

Joshua's advent calendar: I got this started but not finished and it wasn't missed this year but I think it will be next year when his Lordship is nearly 2. So I'm posting it here in Q1 in an effort to finish it early and not at the last minute I'm not going to promise that it won't appear on Q2, Q3 and Q4 as well though! 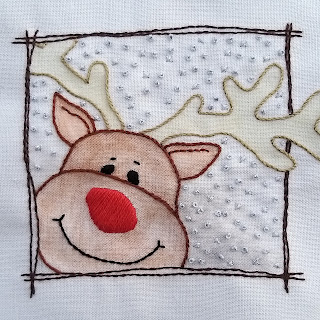 And the same thoughts about Joshua's Santa Sack - though I did pick up a great fabric in the post-Christmas sales for this, so his will be different (and a little less pink) than the girls. Again, expect to see this on Q2, Q3 and Q4 - I'll probably not start it until December 2020.... but you never know!

Item three is the Sisterhood Quilt block I made on retreat last October - I have tote-based plans for this and I've bought an alphabet pattern to hep with the reverse. I've also got plans for a second tote bag in mostly blues, using the same alphabet pattern. 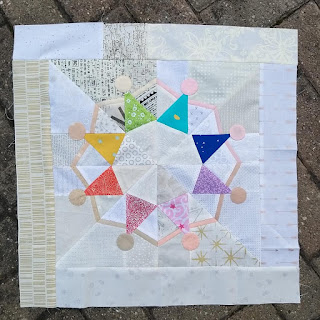 My Fancy Forest quilt is getting closer and closer to the finish line. It's now basted and ready for quilting. 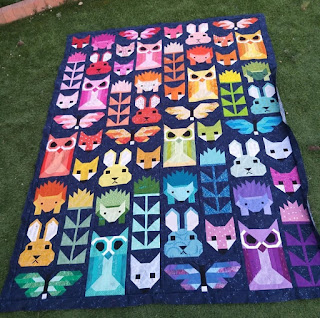 I finished a Preppy the Whale quilt last year and now I need to make two matching cushions. I really just need to get these done as it's been hanging around too long.

A baby quilt - 2020 is going to be heavy on baby quilts! This one is an Awesome Ocean one as I enjoyed making the full size one so much! And the recipient's big sister needs a matching cushion I think!

I made some tubs at Christmas out of batiks... and not-so-subtle hints were dropped. So I need to make another set. 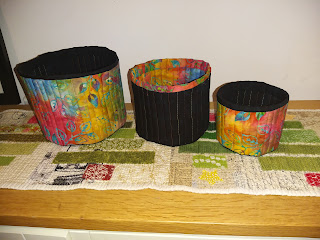 And while I'm at it, some tubs for hair bobbles would be a good idea too... they end up all over the house!

I started a Unicorn embroidery for Mia last year. It needs finishing.

I also started a Tall Tales quilt for Mia last year. That too needs finishing... 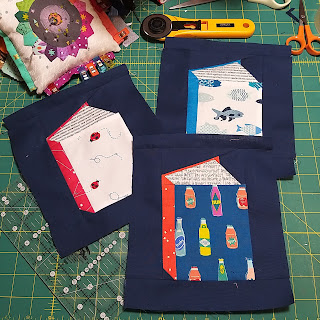 I have a Meadowland quilt all cut out - I thought it would be a quick make, That was a year ago. There's a new quilt-along kicking off in February so I'm planning on joining in and finishing this. It's in all Pinkerville by Tula Pink and I love it!

I would also like to finish the Sharks Dinner block of the month I followed last year, but there's a lot of work still to do on this one, so maybe I'll settle for some progress. 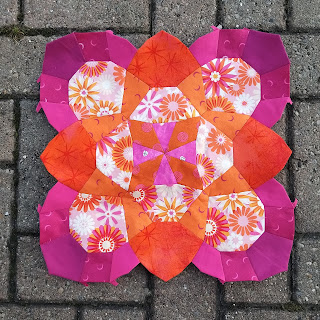 The blueberry park hexies, started two years ago, were a project I was surprised to pick up again just after Christmas. But I've run with it and now I'm pretty close to a fairly sizeable quilt top. 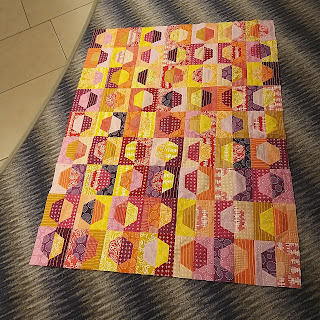 Mandolin: an EPP quilt top. There's also quite a lot of work to go on this before it's finished, but already this year I've prepped the remaining five blocks, so that's progress. 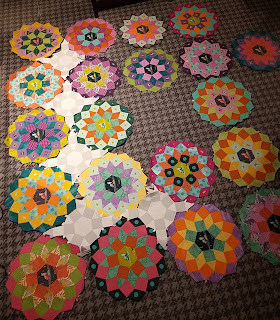 Tula Nova: this needs quilting and for some reason it's just not calling me. February will be two years since I started this quilt and it holds so many memories... 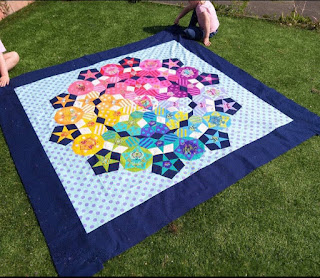 City Sampler... that quillt I started nearly 7 years ago.... 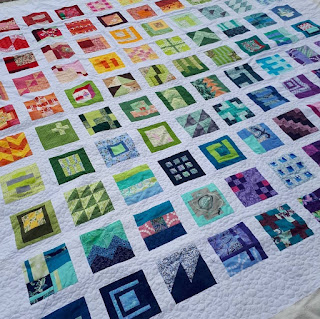 Skirt Pouch... from a skirt...for a friend. The fabrics scares me a bit!

Placemats - pink and linen I think. For a wedding present.

Kinship rainbow, which is a quilt top, but not yet basted, and I don't know what to put on the back yet. 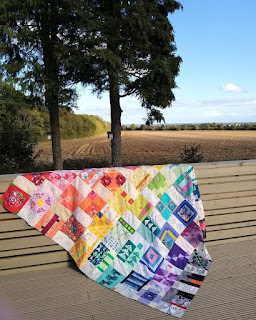 Crumb quilt: another quilt top, but I do know what I'm backing this one with.

Neon City: pulling out the oldies here - this was my quilt from #100days100blocks the first time round.... it's a pile of blocks and a pile of sashing - I got stuck at my favourite part... 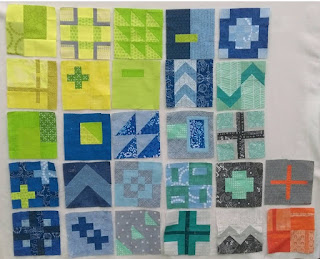 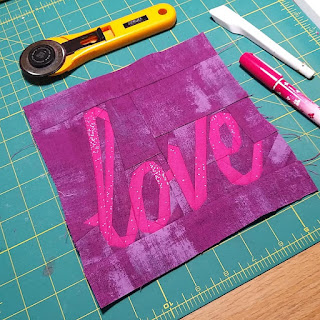 Not a bad list! Twenty-four items, and a good mix of the maybe and the unrealistic!

Well I'm pretty pleased with how productive Q4 was - while I in no way finished everything on my list, I did finish quite a lot, and I've started the year really motivated to finish more. So far I've got to 8th January with no new starts! That's an absolute miracle!

So my final finish to report here is the reindeer Christmas tree decoration I made for Joshua. It's made from felt and was self-drafted based on a lot of Pinterest images. 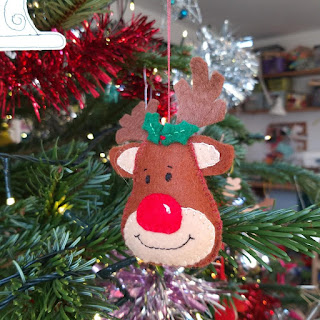 This was my 11th finish of the quarter. Here is a round-up of the others: Preppy the Whale 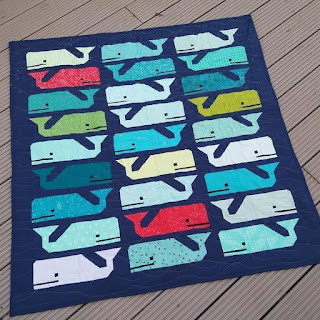 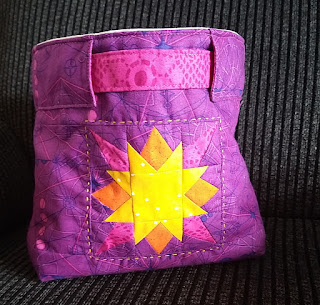 I finally finished off the Kittens Around blocks into 2 cushions 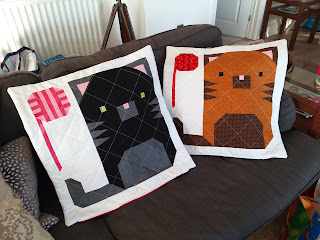 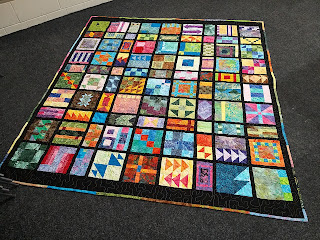 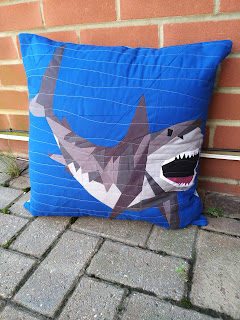 A Christmas decoration for Mia 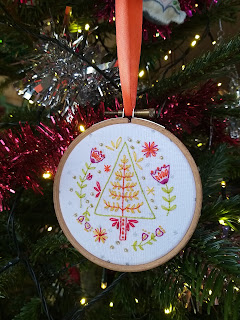 And another for Jessica 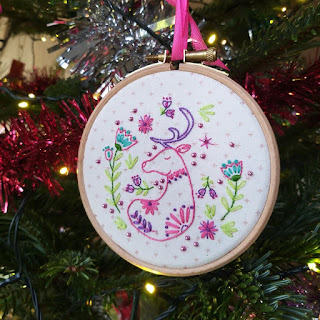 The special pouch using the special fabric I cryptically mentioned on my original post: a marmalade pouch 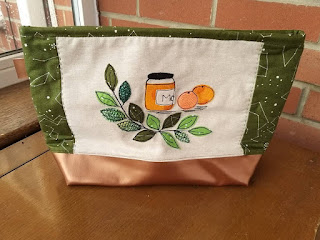 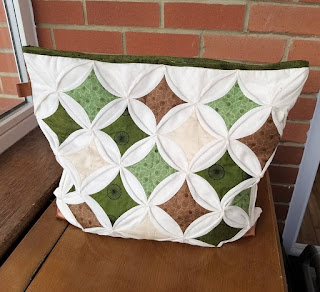 And finally the Summer Sampler. 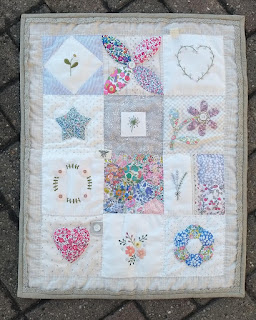 I also made some really good progress on a couple of other projects, especially Fancy Forest and the Tall Tales Quilt. I was a bit disappointed that I didn't get Joshua's advent calendar or Santa Sack finished for this Christmas, but it didn't matter in the end - the girls shared theirs with him when it was needed, and he's still a bit too little to notice. And in the post-Christmas sales I picked up a brilliant fabric to make Joshua's Santa Sack just a bit different from the girls. And even though these are Christmassy makes, I'm going to pop them on my Q1 Finish Along list for 2020 so there's no last minute rush next Christmas - don't laugh - it might happen!

You can find my original list here, and I'm linking up with the Finish Along 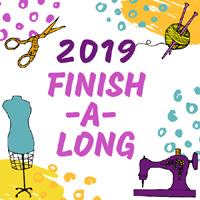