We have just had a fabulous weekend celebrating Mia's third birthday. Third! Where did those three years disappear to? She is a little star: She is constantly talking, and her speech is so good; she is constantly busy with something - she wears me out just watching her. She loves fabric and quilts and Mummy's sewing machine. She loves dolls houses and little dolls (God bless Happy Land) - we bought her a castle dolls house for her birthday. 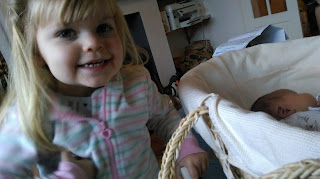 She is also stubborn (don't know where she gets that from) and isn't keen on having her photo taken - so the one above is the most recent, nice one that I have! She refuses to potty train or give up her dummy. She also refuses to nap (except for when she's with the childminder - black magic, I tell you!). But every day with us, at some point, she will curl up on the sofa with a cushion and a quilt and "have a sleep" - during which time she watches TV and doesn't close her eyes. She picks which cushion and which quilt she would like. She has a couple of quilts that a specifically hers, but they are getting a little bit small for her now, so it was time she had a big-girl quilt. To be honest, I've been planning on finishing this for months - back when she moved into her big-girl's bed, then Christmas. But I've only just got there. I finished binding it on Tuesday. 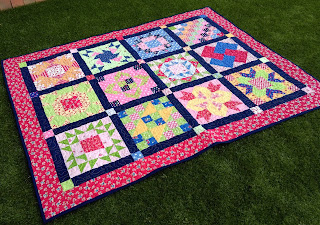 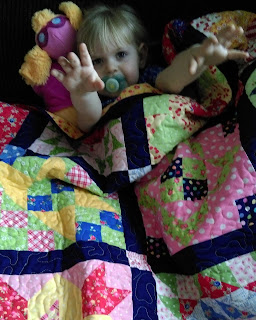 The pattern is from the Jelly Roll Sampler Quilt book by Pam and Nicky Lintott, and it's my absolute favourite thing to use a Jelly Roll for - I've made the same pattern 3 times now and I don't think it will be the last time! The fabric is (I think) Pam Kitty Picnic - I had a custom jelly roll cut by our local quilt shop. The backing was a bargain: two years after I bought the jelly roll, the fabrics that the shop had left were put on a very good sale. So I was able to buy enough for the backing - two different fabrics. I also picked up a different border fabric in the same sale. I quilted it with an all over stipple in a yellow variegated Aurifil 50w thread. 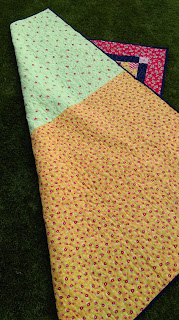 My husband isn't keen on the quilt - but then, he's not the target audience, is he! I also have to share with you the cake I made for her party on Sunday! It's one of those times when you create something you've seen on Pinterest and it actually turns out ok! 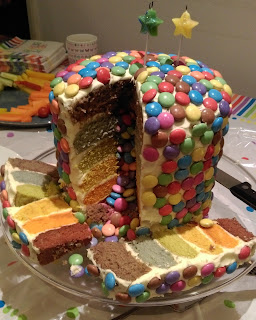 It used 7 packs of Smarties - the bags, not the tubes! And an awful lot of food colouring! The downside to this success, is that I have to equal it for Jess's birthday is a few month's time and better it next year. I fear I may have set the bar too high!

The quilt, not the cake, was a finish from my Finish Along list!

Hooray for a quilt well-received by its new owner. Very sweet and bright and beautiful for your little one. Great cake too. On behalf of the 2017 global FAL hosts, thank you for participating in this quarter's FAL.