Sloths and Unicorns [A Finish]

Sloths and Unicorns - not a common combination.... but they happen to be my sister-in-law's two favourite things, so why not put the two together in a quilt? Especially when a favourite designer has two very good patterns! My sister-in-law, Jane, turned 30 this year - back in June, if I'm honest, but quilted gifts made by me are rarely on time! Earlier in the year, I showed her the Lisa the Unicorn pattern by Elizabeth Hartman, and some very unsubtle comments were made about how she'd love a quilt like that! I then remembered the sloths pattern and asked her which she preferred. The obvious answer was that she liked them both!

She also likes pink. Pink and grey seemed a reasonably workable palette, so I give you Sloths and Unicorns in pink and grey (with a bit of glitz for the unicorn's horns)! 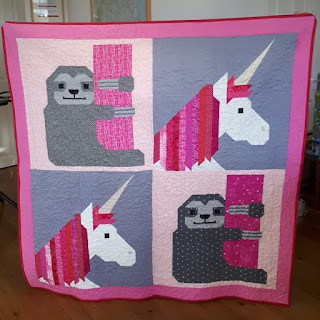 The Elizabeth Hartman patterns are, as always, fabulous. Both of these blocks are more involved than many of her other patterns, but they finish up as 24"/26", so I only needed two of each. And all of the fabric, except the pink border, came out of my stash, which is another win! 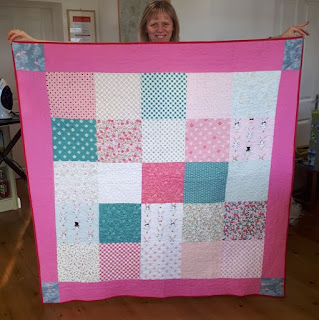 The quilt is entirely double sided - my mother-in-law pieced the reverse using an Alice in Wonderland layer cake (another of her favourite things), with a few extra squares from my stash. It's quilted in an all-over stipple using pale pink variegated Aurifil thread. It's been sitting waiting to be quilted since the end of May - I just didn't have the energy. When I finally made the effort to get it done, it only took a few hours but felt like a huge accomplishment.

The bright pink binding wasn't in my stash, but I think it finishes the quilt off beautifully! The quilt finishes at 60" x 60" and is another finish from my Q4 finish along list, which you can find here.

Such fun! Sloths and unicorns...slow and elusive! Congrats on the finish and on behalf of the entire FAL crew, thanks for participating!