There is a chance that World Book Day may be my least favourite day of the year. It's a test for parents to find a costume... and of course Mia didn't pick out a character that appears in the Asda selection of fancy dress outfits, did she. No. She decided to be a nameless character from a book called Ten Little Superheroes. If you're unfamiliar with the series this comes from, and you have kids up to maybe 6 or 7 years old, then you need to hunt these books out because they are brilliant: we started with Ten Little Pirates and progressed to Ten Little Dinosaurs. Then Ten Little Princesses, Ten Little Monsters, Ten Little Elves and finally Ten Little Superheroes. And then the World Book Day book this year was Ten Little Bookworms. We are crossing our fingers there will be more in the series, as these are a firm favourite at bedtime.

So as I said, Mia picked the superhero above. I have to confess I'm quite proud of her - no princesses (though it would have been easier), no pink (well not much), and something that no-one else was likely to have. It was International Women's Day the next day and I couldn't help but think that I am raising two very strong (in the best sense) women (God help us... and their little brother). 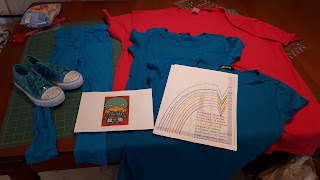 But of course, this was not a costume that was available in the shops, so I had to make it. Thank goodness for Ebay and cheap T-Shirts. And for the Elsa cape we had in the dressing up box. The tunic was pretty easy - the centre pink belt was cut from a second T-Shirt and helped pull in the over-sized adult T-shirt... didn't quite get it on her waist but never mind...

But the crowning glory was the mask! Of course her superhero didn't just have a basic mask. Oh no. Her superhero had a whole hat... I found a tutorial online for making fleece hats, and just extended the length so it had a long back and I was able to cut away the front for eye-holes. 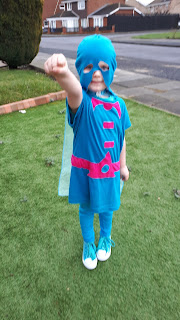 We added turquoise leggings and sparkly turquoise sequin trainers and ta-dah! All that effort, a pretty good likeness and because she had picked someone so obscure, nobody appreciated it! Ha ha! 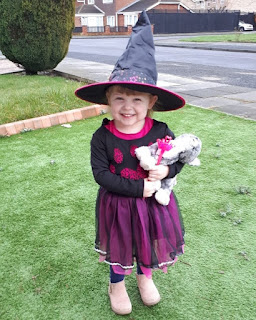 And of course, Jess had to get involved too.... I found a witch costume in the dressing up box, and shoved a cuddly cat at her - the witch from Room on the Broom!
Posted by Jennie at 18:39

This made me smile. Oh how I hated dressing up days at school as a mum but oh how I enjoy looking back at the photos! It didn’t help that we weren’t always given much warning. But I think Mia’s outfit is amazing and you can smile when you look back at these photos although in a few years Mia will be cringing. Trust me all too quickly self consciousness hits usually around the time they go to senior school when they wouldn’t be seen dead dressing up!