The yellow tablecloth that I rescued from relegation last week is finished!!! 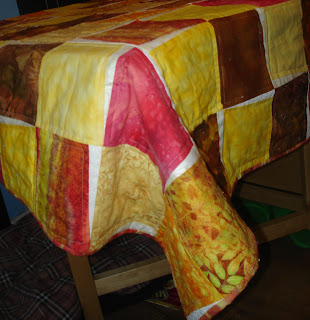 Last week as my project for the Friday Night Sew In I pulled out this beauty that I had been ignoring because I had to do some unpicking. The unpicking took ten minutes and I quilted over half the quilt top last weekend. This weekend I pulled it out again, cleared my sewing table and quilted the rest of it. It only took a few more hours. Then it took that time again to sort out all the thread ends.


This morning I could see the finish line. While Nadal and Djokovich slugged it out in the tennis, I made my binding, attached the binding with my machine and then stitched it all down by hand. This is the fabric for the binding before I cut it up - isn't it gorgeous?

Unfortunately I bought it before I appreciated the importance of knowing what the fabric was, so I have no idea - all I can tell you is that it is a batik, it's very pretty and I had the last piece from the bolt from a shop that has since closed down. But I do have some left over...


We were very concerned that the quilt wouldn't hang well when used as a tablecloth, so I added curtain weights to each corner, which made a huge difference. I also washed the batting before I quilted which means it won't be as puffy. 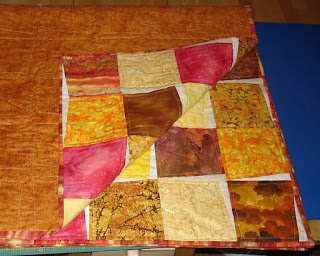 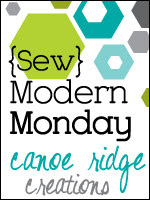 For the first time ever I have pieced with stripey fabric - I was so careful and I'm so pleased tht it worked out. I used some of the tips from the Flickr group when cutting, so instead of two rectanlges, I cut one big square for the side pieces so I didn't have unmatching stripes.

Here are all three togther. One more of this set to go.