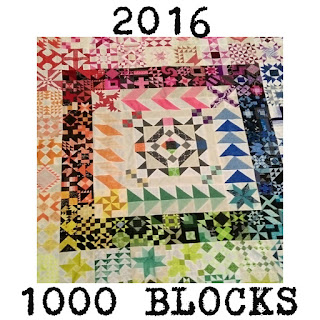 Whilst 2015 was all about swaps, 2016 was all about blocks.Lots of blocks and lots of projects. I had an original target of a block a day for the year - 366 blocks. I smashed that target by June. So An obvious new target was two blocks a day for the year - 732 blocks. But by October I had made 755 blocks and I started looking at 1000 blocks for the year. I needed 111 blocks in December to hit this target. And I struggled. Christmas sewing started to take priority, and I could feel that target slipping away. So close. And something I would probably never achieve again, at least not for quite a while, as 2017 will see life speed up and fill up as I start a new job. But of course, the end and start of the year sees loads of new projects and sew-alongs spring up and Molli Sparkles announced his Honey Pot Bee and a wild card early block - Diary of a Quilter's Christmas Tree block. I started making a few of these blocks on a bit of a whim, and finished up with 76 of them. 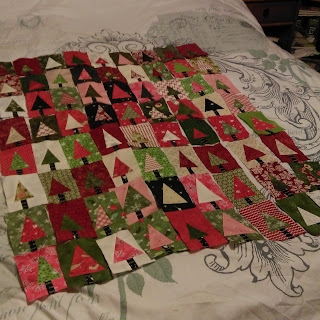 By New Years Eve I had 1015 blocks total for the year. Early in the year, as I posted numerous blocks on Instagram, someone asked me what on earth I was going to do with all these blocks. The short answer is spend a lot of time sashing them and swearing about it, as this is my least favourite part of the process. The more detailed answer is make some quilts: here are the projects I was working on throughout the year: some I've finished, many I haven't. 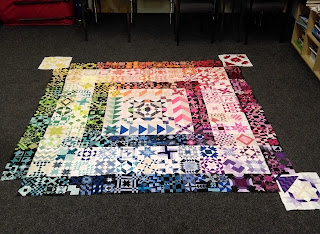 I'll do a full roundup of this quilt once it's finished in the coming months, but for now, let me say that this was a fabulous experience - we had a little facebook group where we all egged each other on, I learned some great techniques, made some absolutely beautiful blocks (and some truly ridiculous ones too), and I'm going to have a fantastic quilt. Kathy, who ran this project, is running it again in 2017 and I cannot recommend it enough. It's totally free, very well written, and the support online is huge. It's not too late to join in - you've only missed the first few blocks an I promise they are easy peasy! For the moment! 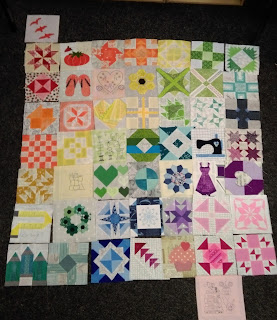 I wasn't intending to join in this - just make a few of the blocks when I saw one I liked. Of course, I liked most of them... 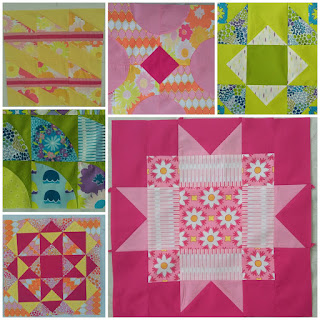 I didn't need a new project, but I had the perfect fabric. I got half way before falling behind. 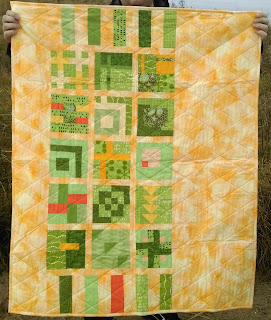 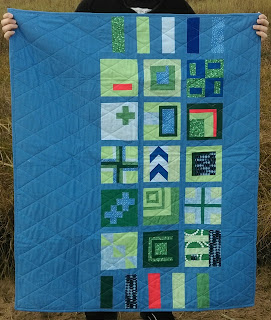 It turns out the Angie @gnomeangel is a really bad influence - she runs these fabulous quilt-alongs and I just can't help myself. This one used Tula Pink's City Sampler book. I have already made a full quilt from this (still half quilted), but the 100 blocks are so much fun. It made 206 blocks for five different quilts. Two are finished. Three are not. Rumour has it, this quilt along will also run again in 2017 - I have my fabrics picked out already! 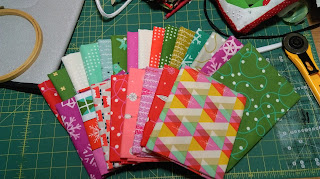 Those were the big projects: I also pieced a lot of EPP blocks for various projects; a few baby quilts, including the Moda Modern Building Blocks Quilt Along which needs to be finished very very soon - the recipient is due in the next few days!; a full size sampler quilt, blocks for Mia's new quilt (to be finished soon), the Zodiac BOM (untouched in months); some log cabins; a bit of embroidery; and individual blocks for cushions and the like.

I have to say, that on 1st January I almost felt a bit deflated - I had met my goal for 2016 and hadn't set a similar goal for 2017. With good reason. My goals for this year are still under construction, but I should probably include some finishing!

Pop back for a final Review Post where I'll look at the things I finished in 2016! Turns out there was a few of them!
Posted by Jennie at 21:00

Your 365 looks fabulous! I didn't join in last year as there was too much going on, looking to do it this year. I love your colours!