Whenever Angie @gnomeangel announces a quilt along over on Instagram, you know it's going to be a good one. She's responsible for The Farmers Wife 1930s quilt along, and the #100days100blocks. Of course she has a couple of things kicking off at the start of 2017 and one of them is #snailday #gardensnailsquilt.

I wasn't going to join in this one. But as I was browsing Instagram this morning, Mia saw the snails and declared undying love. As we scrolled through the pictures she named each snail she saw after family members. Life with a two-year-old is definitely entertaining. So I thought this could be a project for both of us. Mia loves pressing the buttons on my sewing machine, and helping, so this could be a project to work on together. 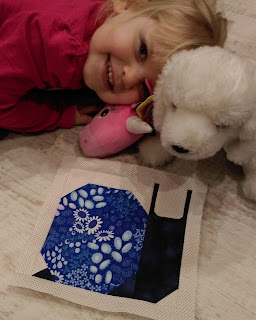 A snail quilt is a particularly humourous addition to our quilt collection. In our old house, we had quite the rout (apparently that's the collective noun for snails, along with 'escargatoire' or 'walk') of snails. My husband decided to remove one particular offender by drop-kicking him over the fence into the field beyond. I would love to say it was a good idea. The reality was that my husband's supporting leg slipped as he swung for the snail. He ended up on his arse with a broken wrist and the snail escaped unharmed. I find it quite amusing. He doesn't!

The snail pattern is by Pen and Ink designs - you can find it on Craftsy. The quilt-along is a snail every Sunday, but if you want to join in, you can post your first snail any time this week.
Posted by Jennie at 20:29