A bit of a delay in sharing with you the latest on this project. Whoops. But I kept up with the Round We Go Sew Along with @GnomeAngel for the second month as well. Here are the four blocks. 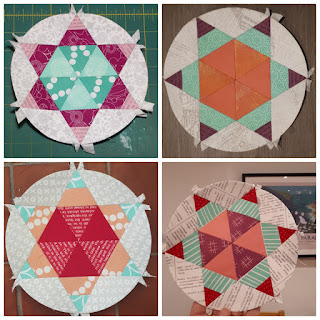 I also made a decision on background colour: last month I was humming and hahing between a royal blue, which was true to my original colour inspiration, or a deep wine purple, which I discovered in my stash and was quite a good compliment to the blocks so far. I'm going with the latter. It just makes the blocks sing. I haven't done anything more about this decision and my resolution to applique the blocks as I go so I don't end up with a tonne of applique at the end that I don't want to do has gone the way of most resolutions. I planned to make a start over Christmas, but that week between Christmas and New Year was no where near as productive as I had hoped.... so for now, I just have a growing number of circles...waiting to be appliqued.
Posted by Jennie at 21:00

I think Christmas and New Year should be further away from each other, maybe a fortnight apart instead of a week so we can properly take advantage of the 'no schedule, do whatever you feel like' mood...