Month 5 was the month the miracle happened. But first, let me tell you how pleased I was that the month 5 block was a lovely, simple, straightforward one after the stinker that was December! And because it was so lovely and straightforward, I was able to make progress with the next steps. First up, here are my January four: 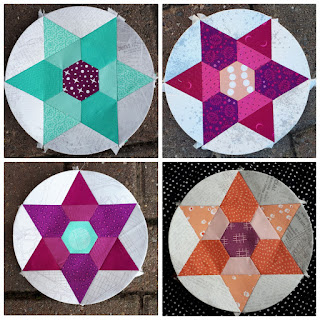 I've been saying from the start that I wanted to applique these circles as I went along, otherwise I would hate it at the end. That didn't happen for the first four months. For the first two I had a good excuse - I couldn't decide between two backgrounds. But by month 3 I had decided, just not done anything about it. But my first week back at my Monday night quilting group (where they have big cutting boards that aren't surrounded by crap like my one at home), I got out the backing fabric, and cut it. All of the squares are now ready and I have enough left over for binding if I chose to match it. 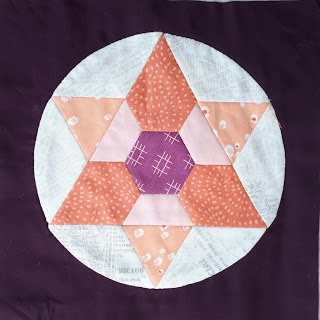 The only problem with the background fabric, is that it is impossible to photograph well - every time I tried to photo it, it came out black - it isn't - it's a very dark wine-like purple - I think it's Pure Elements in Cabernet from Art Gallery - I'd had it in my stash for a few years so it was a lucky find!

I decided to hand applique, because it seems fitting when you've hand pieced. Basting was a bit of a trial: I used the glue stick I usually use for basting, to hold the circle in place temporarily, and then I machine basted about a quarter inch from the edge. Then when I was doing the applique, I cut away the basting when I got the six points, so I could tuck the ears under. I confess that the first one was a bit scary. It didn't look great until I'd cut away the backing and removed the papers. Then everything relaxed, and I'm so happy with it.

Of course, as it's hand pieced and hand appliqued, I think it should be hand quilted too. So I'm going for a quilt as you go approach I even got a few blocks quilted this month! And I couldn't believe the difference the quilting made - it brought them to life! 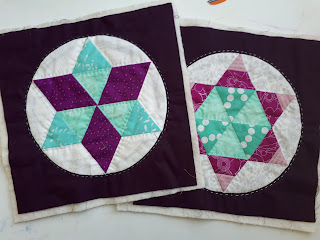 Maybe it will be a finished quilt at the end of the quilt along, not just a pile of random circular blocks! You never know!

These are lovely! Could you give the circles a good press (and starch) and then leave them to cool under something heavy before appliqueing? That way, you could remove all the papers and the outer seam allowance will remain tucked under.