Turn back the clock to November 2017 and I started a project. I was going to make a dog quilt for Jessica. I made one dog of the three required for my planned layout. And then it lay abandoned. I suspect it was the foundation piecing that caused it. This dog has then appeared on nearly every Finish Along list since, and gradually been downgraded from a quilt to a cushion, still with no further progress made! 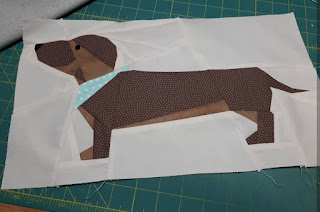 Well last week was the week! I got it out, Jess decided she still wanted it (I had thought about making it for Joshua but she gave it such a good reaction, I couldn't - Josh will get other things...) and she "helped me" chose fabrics and cut them out (no children touched a rotary cutter in the making of this cushion). And then she helped me piece them. 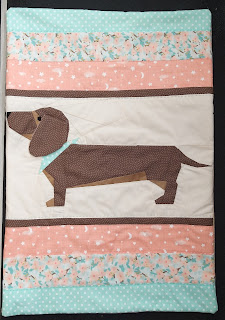 The ear is a flap - I'm a bit worried it'll be pulled off, so I've sewn about 5 lines of stitching with the machine! I hand quilted it and added a back and it's done. It's off the list! The Committee will be happy! 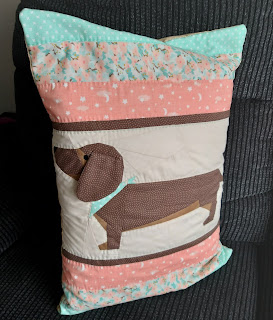 The foundation pattern is by @jo2owls and was in issue 52 of Love Patchwork and Quilting. Obviously it's a ridiculously odd size, so I need to try and either find a weird shaped cushion pad, or hack about a cheap pillow to make it fit. But that's fo another day! For now, this is a Finish Along finish. You can find my Q2 list here.

How cute! Love the floppy ear. Thanks for linking up for Q2 of the Finish-A-Long.