Look at our garden now! 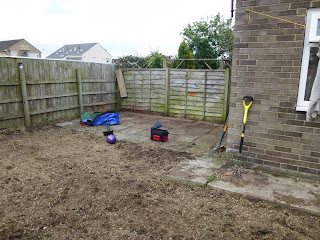 A whole load of mates came round yesterday and attacked the garden - we cleared all of the rubbish that was in the garden when we moved in (over four years ago) and that has accumulated since - there is currently a full skip on the drive. We still need to level off the area which will be the lawn, and then we can start moving things in - turf, flowers.... the bbq has moved in already and we thanked our friends with meat, meat and more meat!

But that isn't all we've been up to this weekend. Remember the ultimate classic - the S-reg Corsa my hubby used for the rally in May? It got another run out today - we took part in the Whickham and District Motor Club Rally. Together. As in he drive and I navigated. And we are not getting a divorce! We tested four and half years of marriage and we survived!!! We came seventh out of twenty cars - not bad!

And of course, I've done some sewing too. What would a weekend be without it. Debs's quilt is stalled. The top is fully pieced (I've added the final border) and the back is pieced - I bought a large good quality sheet, but when it came it wasn't quit big enough, so I had to add in a small pieced strip. I really hope it's big enough - I can't face doing more long seams for this project. Linda is helping me baste it tomorrow and then I need to get it quilted and bound by close of play on Thursday..... I can't photograph it at the moment - it's too big.

But with that project on the back burner I started a quilt that I had really written off as definitely not getting finished in time. Turns out I had a little time. There are quite a few baby's due at work over the next few weeks, so this is a quilt for my mentor. She doesn't know the sex of the baby, but I knew she was doing the nursery green, so I raided my stash and added in some orange (more than I had planned). Freshened it up with some strips of white and voila! 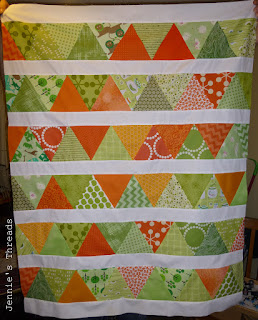 I'm calling this quilt Murmurations - it's the noun for a group of starlings and this makes me think (in a very stylised way) or rows of starlings sitting on a fence. My Mum loves to feed the birds and she has a few starlings in the garden. But Mammy and Daddy Starling have a brood and expect that nature will mean half the brood won't make it to adults. They don't count on Cafe Mum and all the bird food. So all the starlings from all the broods survive and absolutely fill Mum's garden. They are like five year-old squabbling and fighting over the food!

Something else that needs to be quilted before she leaves for maternity leave. Next Friday! I may not be sleeping much this week.....

And I finally finished block 7 of the City Sample. I've called this block Murmurations (the block name came before the quilt name) and the fabrics are Noteworthy (from Sweetwater), a yellow and pink stripe from Grandmother's Flower Garden for Lecien. 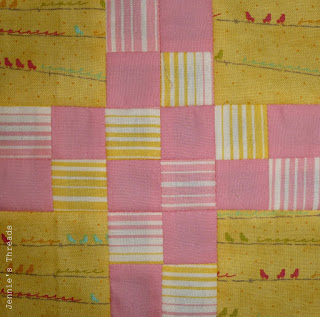