It had to be this quilt for the Bloggers Quilt Festival hosted by Amy. This is my finished 365 quilt.  Eighteen months from first stitch to last, and a baby along the way - this was most definitely a challenge! A block a day for a year - it totally took over my life! 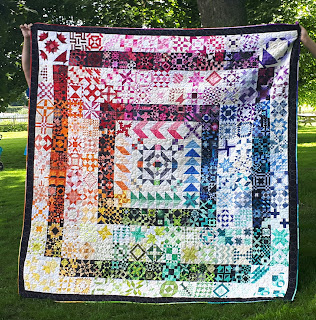 I started piecing tiny, deceptively straightforward, 3" blocks in January 2016 - that first inner dark border. The blocks became increasingly complex through January and into February as Kathy, the designer, walked us through new techniques each week/10 days. By the end of March, we had the centre and the first dark border complete. Then I gave birth to Jessica. And fell behind. 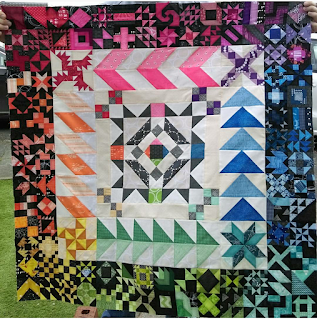 It was most inopportune timing, as the blocks for May and June were the 6" blocks that made up that first light border. They combined all the skills we'd learned to far with some of the smallest pieces of fabric I've ever worked with! But each individual block was a stunner.

At one point I was over 80 blocks behind, but what else is a girl to do with her maternity leave: Jessica and I kept on piecing. 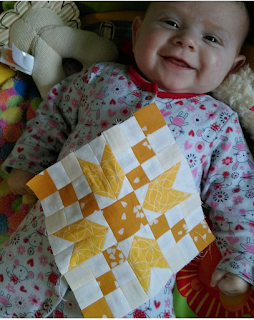 By September I had just about caught up. Which was just as well because that's when we got the first of those outside corner blocks. My word. I have never pieced such a complex block. The other three corners followed on the first of October, November and December and each one was a mammoth challenge! But worth it! 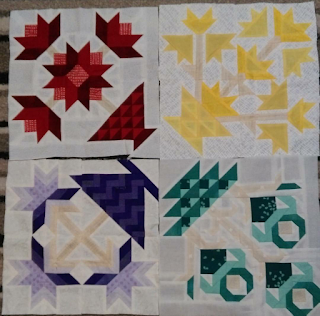 I finished the final block - Y-seam hell - just two weeks into January - I was truly amazed that I had kept at it for the whole year. And the reason I did was because we had such a great little community over on Facebook - there were about 30 of us regularly posting, generally keeping up and finishing quilt tops during January. 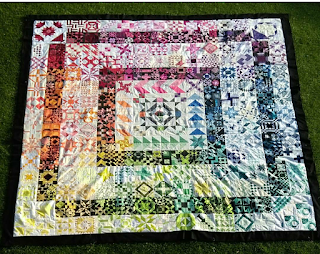 For the first time ever I decided to send this quilt out to a long-armer for quilting: the thickness of some of the seams would have meant inevitable thread snapping and needles breaking and I would have fallen out of love with the quilt and possibly never finished it. I picked Cath a.k.a Cumbrian Long Armer, because she sounded like me - a mum, working from home. She turned out to be the nicest person, who lived in the most gorgeous spot on the Cumbrian coast. Whilst I entrusted the quilt to Royal Mail to get it to her, we picked it up in person as part of a lovely weekend away in the Lake District. I picked an all over pattern to let the piecing shine. 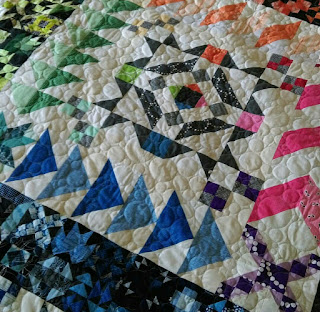 I put off the binding. But put on my big girl panties in May and did a matched binding to reflect the rainbow. 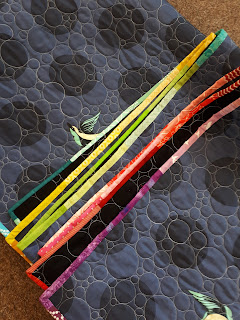 I put off the hanging sleeve too, but eventually did that and embroidered a rather minimal label! My quilt hung at the Festival of Quilts in Birmingham this summer in an exhibit dedicated to 365 quilts, alongside the quilts of friends who made the journey with me. 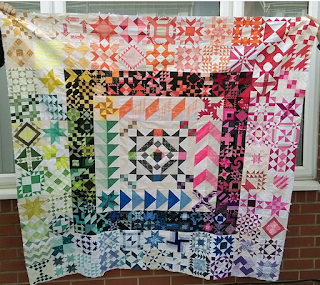 If you're interested in making your own 365 quilt, Kathy will be running the challenge again in 2018. I cannot recommend it enough. Start out in January and work through in order and even the most beginner quilter can make this quilt. There isn't a single template, no foundation piecing, no hand work. It is entirely rotary cut and machine pieced. I can honestly say that this has been the most amazing quilting journey I have ever been on!

I'm linking up to the Bloggers Quilt Festival and going to go and have a look at the other wonderful entries!
Posted by Jennie at 20:30

This is the most amazing, rainbow-tastic quilt! It popped out at me from the Blogger's Quilt Festival page. A huge round of applause!!

Congratulations! What a huge accomplishment. Even more amazing that you managed to get it all done and give birth too! Amazing.

A big congrats to you! It sounds like an enormous amount of work, but the final result is fabulous! I think this one is my favorite out of all the ones I've seen so far!

What an incredible quilt! I'm so impressed you stuck with it, even through having a baby, but the results are certainly worth the effort. It's really beautiful and just seems to sparkle with all the colors and different block designs. Just gorgeous. Thank you for sharing it in the festival!

What a mammoth effort! Excellent work! The Facebook group must have been wonderfully encouraging. Love the rainbow binding too. You certainly have something to show for your maternity leave.

Such a lot of work but what an amazing quilt. Love all the colors!!

This is amazing! I love all of the details and the rainbow goodness of the quilt!

OMG! What a work! That's just woooowwww! I love it ♥

Wow! Pretty incredible quilt and I enjoyed reading the story you shared with it. 3 inch blocks. Oh, my that WAS a lot of work. It turned out so very nice!

This is a smashing quilt! Well done on making it, and for getting it finished.