Two toddlers and a tent

As I mentioned in my last post, we came back from our family summer holiday a couple of weeks ago now. Whilst it was nice to spend time away from staring at a computer screen every day, this years holiday came with its own challenges. 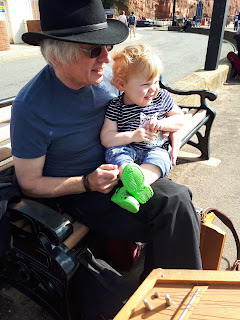 We spent the first week in Sidmouth, as always, for the annual folk festival, sharing a house with my parents, my brothers and his wife and young son, and my mother-in-law. This year there was added complication as my Dad has spectacularly broken his foot, so not only did we have two buggies, we also had a wheelchair, zimmer frame and crutches to contend with. And if everyone had just done their fair share of washing up and been considerate of others, it would have been a lovely week. Sadly that wasn't always the case. Add on a musical line-up that wasn't the best ever and it wasn't the great festival we're use to. We will have to think very hard as to whether we go again next year. Nevertheless, the girls seemed to enjoy themselves.


We headed from Sidmouth to Cornwall and a small campsite just outside of Fowey/St. Austell. We met up with my brother-in-law and his family and set up camp together. The camp site was fabulous, the tent went up easily and generally the weather was good. However, Jessica decided that her main aim of the week was to escape. We bought so many windbreakers to try and cut off all escape routes and she would still find a route through the guy ropes and out. Having used up a lot of patience and tolerance the previous week, this got quite wearing.

Our trips out were good fun. We spent a day at Tintagel Castle - the hills and steps nearly killed me! 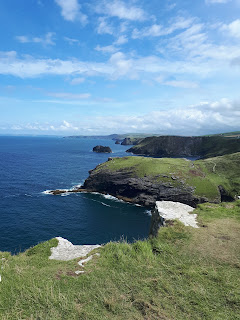 We went on a boat trip round Fowey harbour in the glorious sunshine. 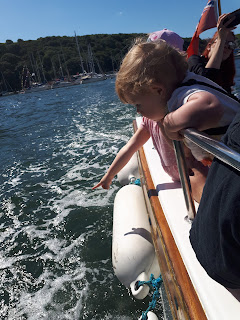 We visited the Eden Project. Twice. I was blown away by it. They have a temporary space exhibition at the moment, and the girls were totally fascinated by it.
And we visited St. Mawes... Bedruthen steps...

...And Padstow. But we forgot that Jess is only 15 months old, and too much time in the car was starting to get to her. So after she's screamed around the narrow lanes of Cornwall, and escaped the tents 5 times in half an hour we called time, and headed home a few days early.

Much as I love my girls, it was great to hand them over to the child minder on the Friday, and to have a dinner out where the only person I had to worry about kicking off was my husband. And he's generally well behaved.

In between the frustrations we had a wonderful time and made some fabulous memories, but I think the holiday will go down in family legend as the one Jess made us come home from early!
Posted by Jennie at 20:27

Your story brings back memories! A holiday with my parents, brother, sister-in-law with a baby and my two babies!!! Lots of frustration, but also nice times. One decision....never again, so we can stay friends!!

Sounds less like a holiday and more like a test of endurance and patience! Bet you were glad to have everyone back in their own beds!