Now for some finishes - as promised, I've got quite a few to share with you! First up is the Long Time Gone quilt. Back at the start of the year, Angie @gnomeangel announced her next round of quilt alongs and this was one of them.


The pattern is by Jen Kingwell. And I bought the pattern without really committing. I know that these things have a habit of selling out. Last year I made the My Small World quilt to one of Jen's patterns, and if you've followed me for a while, you'll know that I had a bit of a love hate relationship with it. This was why I was hesitant. But in the end I love the finished quilt. So I decided to join in this one. Plus, the fear of missing out on one of Angie's quilt alongs is real! 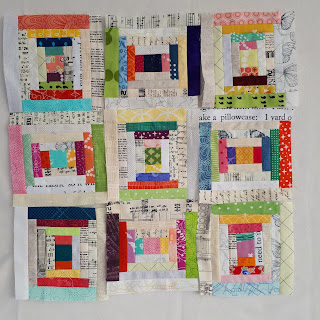 Unlike My Small World, Long Time Gone is entirely machine pieced. But that did not mean it was easy. This quilt along stepped up the game from a block a month (as this quilt was originally run) to a block a week. And whilst some of the weeks were very easy and quick, some... well lets just say - keeping up was going to take some serious organisation and forward planning.

So that's what I did. Whenever I had a free moment. I cut ahead. And where possible I pieced ahead too. But it was the cutting ahead that was the game changer. Half way through the quilt along, I had everything cut and ready. But the final block was a pineapple block - foundation pieced. But I needed 16 of them ad they each had 37 pieces and finished at 5" square! 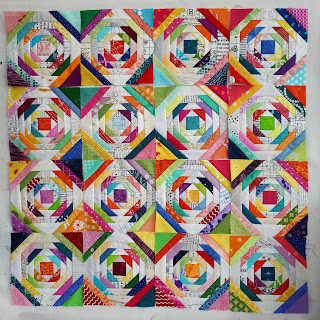 My fabric selection for this quilt was totally random. I tried to go with my instincts, not overthink it, and have total crazy chaos. The end result was what it would probably look like if my stash vomited! The one thing I consciously did to pull everything together, was to use low volume prints (again pretty randomly) as a consistent background in all the blocks. The borders drive me a bit mad. I thought I'd cut enough strips. Turns out I only had 50% of what I needed. That was quit frustrating...

I eventually got my top pieced ahead of schedule, and by the end of the quilt along, I'd actually quilted and bound it. Done! I backed it with one side of a duvet cover from Asda. It's a polycotton, but on the quilts I used it on before, I've experienced no issues with uneven shrinkage, and the qulit comes out so soft with a lovely drape. I quilted it with a pale grey thread in an all over, fairly large scale, stipple. 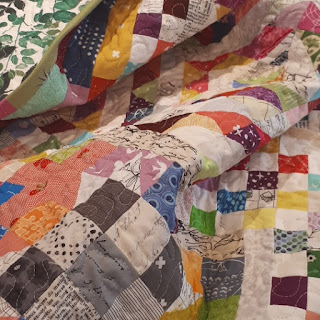 And the final verdict. I love it! It is totally crazy and scrappy, but it's fun and a real reflection of my stash and fabric loves. The odd bit sticks out a little - but interestingly, different people see different elements first, so maybe it is balanced? My plan is that, regardless of the amount of piecing and effort that went into it, this will be used and loved - probably on the sofa in the living room. I use two quilts to cover the sofa and protect it from grubby little mits (children, husband, dog, parents...). Of course that means that this quilt needs a partner. Watch this space for a Gypsy Wife finish around Christmas - that's the plan anyway!

This is a Finish Along finish - you can find my original list here.

It's fantastic! Congratulations on the finish *waves pompoms*

Love it! I'm making a scrappy quilt at the moment and I'm fascinated by the way all those fabrics do 'vomit' without creating a stinker!

Congratulations ! You did a great job mixing all these fabrics. On behalf of the FAL cheerleading team, thanks for joining in.