You know when you see something on line and just have to drop everything and make it. This was one of those things. The Pineapple block was part of Fabric.com's summer block party. I had no intention of joining in, but you see things pop up in your feed... and this pineapple did just that. I have a bit of a thing for pineapples at the moment, so I stopped, took a look, and before I knew it I'd made a block. 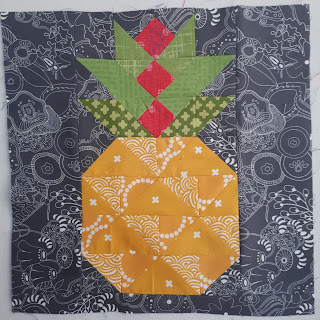 I taped it to the wall for a bit and enjoyed looking at, until it fell down and got lost in the rubble of my sewing desk. So when it came to writing up my quarter 3 Finish Along list, I decided it was time to do something with it, rather than let it become just another orphan block. Both girls had expressed a liking for it, and the best way to have something to be shared is a cushion on the sofa. Popular with all the family except my husband. He's so tall he doesn't need or like cushions. 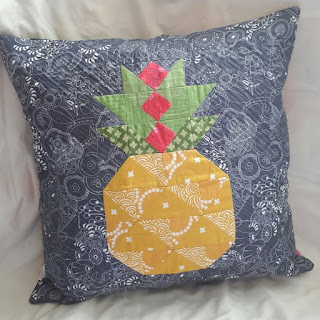 I added some more background to the original 12" block - making it up to 18", and then I quilted it. You may notice that I quilted another recent finish in a similar manner - this was the practice run for that cushion (which was a gift) - if it all went wrong on this it wasn't the end of the world. Except for the distortion caused by the diagonal quilting, which then required some quite severe trimming, it was successful!

The backing is a leftover from the backing I used on my Fussy Cut Sampler quilt - it's bright and crazy and not a bad match. It's also an Asda duvet cover! I decided to use a bright yellow zip. You can't see it, but I know it's there! 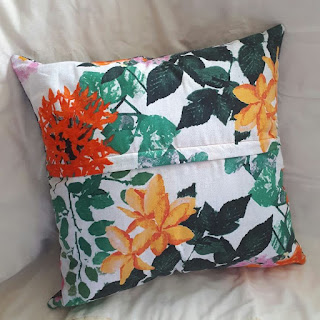 I found a cushion pad and put it on the sofa while the girls were out at toddlers/nursery. I heard the shriek from upstairs when Gran brought them in and they saw it! It makes it all worthwhile!

This is a Finish Along finish. You can find my original list here.

I love it! Congratulations on another finish! *waves pompoms*

I love pillows for a quick and fun finish - yours is wonderful!

On behalf of the global hosts, thank you for participating in the Finish A Long!